British CRUCIAMENTUM – one of the headliners of “Armageddon Descends IV”

The time has come to announce the fifth band representing the metal stage. Well known amongst the underground, British Death Metal formation – CRUCIAMENTUM. 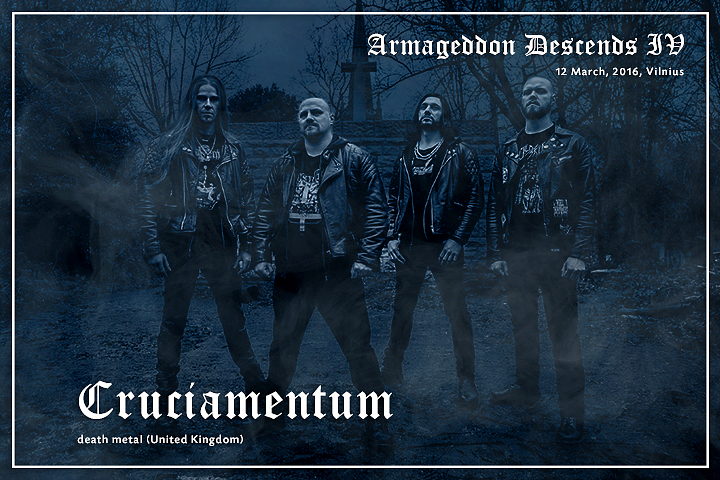 Even CRUCIAMENTUM does not present a lengthy discography, the experience gathered of its members in such bands as GRAVE MIASMA, DESTROYER 666, AXIS OF PERDITION and the vast geography of concerts speaks for itself. The band gained publicity, when it first released its demo “Convocation of Crawling Chaos” (2009), which was followed by a series of performances at festivals as “Black Mass Ritual Fest” (Helsinki, 2010), “Kill Town Death Fest” (Copenhagen, 2011) and others. The bands following release, the EP “Engulfed in Desolation” (2011) solidified the bands status with its developed and diverse sound which was widely presented by European and US tours.

Following a slight hiatus, CRUCIAMENTUM would inevitably resurrect itself to finally deliver their debut full­length album the Death Metal scene has been anticipating. Entitled “Charnel Passages”, this sees CRUCIAMENTUM deliver their mightiest work yet and has already been deemed as one of the most anticipated death metal albums of the year. “Charnel Passages” is a true majesty and exhibit introverted, grim and atmospheric Death Metal that will stand as the death metal monument of 2015. With dark aura, pummeling brutality, and skillful playing the band is extremely efficient in live setting. Next years March CRUCIAMENTUM with AOSOTH, INFERNAL WAR, MEFITIC and QRIXKUOR will arrive in Vilnius to present their sonic terror for the first time in the region.